Ladies out there, I know you’re guilty if I asked you if you have dreamt and imagined yourself ending up with the man that you like. Let’s say, the man of your dreams  or your knight in shining armour. The man dressed in suit or even just a simple white shirt.

The man who patiently waits for your no matter how long it takes for you to get dressed for your dinner date or no matter how tiring it is to accompany you whenever you go shopping. Someone who will give you a big hug and tells you “We made it babe! Let’s continue facing our worries and fears together. I got your back”. But, the real question is , “Is he really the one?”

You might have met each other since childhood or during your high school, said “I Love You” thousands of times, shared kisses as the sun sets and faced problems and challenges together and made hundreds of memories to remember. But, are these enough reasons for you to say that he’s the one? Is the sweetness enough to say “Yes” when he pops out the question that you’ve been longing to hear? Some will surely say YES but some ladies out there are still in doubt.

So how will you know if he’s the one? Is there a certain checklist that we need to follow? Or we’ll just let our hearts decide and feel that he’s really the one? Marriage is a lifelong commitment and of course we would like to have our first marriage to be the last. So before you say yes, make sure that he’s the right one. Here are 20 signs you’re with the right man you should marry.

You Should Marry Him If…

1. He Always Brags about you. If you get promotion at work or even just win concert tickets, he can’t resist telling everyone you hang out with before you even think to mention it. Because he’s your biggest fan (arguably next to your mom).

2. He makes sacrifices for you – and you’re happy to do the same for him. He’ll move cities to live with you if you get a new job or finish grad school. You’re happy to make the next move for one of his opportunities.

3. He shares the same values as you. You know you both want kids and expect to split the child care equally. Or maybe you know you both want kids and he wants to take extended paternity leave. maybe you’ve also agreed that you should each get 45 minutes to yourself to go to the gym every day, or you plan to buy a home and move to the suburbs in five years. You know you’re on the same page with things that matter most to you because you’ve discussed them.

4. Even after years together, he still does little chivalrous things for you. Like open doors for you, or carry you to your doorstep when your feet hurt after wearing high heels all day and you just can’t bear to walk one more block.

5. He doesn’t try to change you.  He knows you’re messier than him, that you always need a pet cat, and can’t cook to save your life, and all of that is all right by him.

6. When you think about marrying him, the best part isn’t the wedding, it’s the idea of spending your lives together.  The wedding is fun, but you really can’t wait for the two weeks right after when you’ll get uninterrupted honeymoon time.

7. You survived a long-distance relationship.  It was hard and scary, but you love each other so much that you were able to make the necessary sacrifices to make it through with a singular goal in mind: living in the same place and being together when it was all over.

8. “I miss you” isn’t just a sweet thing you say.  It’s a reality. Even if it hasn’t been that long (like, two hours) since you saw each other.

9. You don’t like having a roommate and love having your own space, but you’d still prefer to live with him.  You look forward to the end of the day, not because you’ll be done with work but because you’ll get to see him again.

10. He’s your go-to person whenever you have a story to share, about work, about friends, about anything.  You used to tell your parents and friends about all these things, but now, you don’t call them quite as much as you used to . They don’t mind because they see how happy you are.

11. You feel comfortable planning things six months –  or a year – into the future.  You’re not worried you’ll have to cancel plane tickets or say you won’t be needing a plus-one after all. You feel that confident in your relationship.

12.  You can cry in front of him without feeling embarrassed. He knows when to worry and when you’re just caught up in a scene of a movie.

14. He’s close with your family, and he’s made sure you’ve gotten to know his. He’ll call your dad or your grandma without any hesitation. It just makes sense that you’d go to his nephew’s birthday party , even if he’s not there.

15. He cares about your friends. If one of them is having a bad day, he suggests you go spend time with her or invite her to join the two of you for dinner. If he hasn’t heard someone’s name in awhile, he asks how she’s doing.

16. He lets you vent. Sometimes when something frustrates you, you just need to go over it again and again. He doesn’t get annoyed at this, and he dismisses your apologies. The only thing that bothers him about the situation is that you’re upset and he wishes you weren’t.

17. He tells you, out of the blue, that you look hot. And it’s on the day you didn’t dry your hair or put on makeup or even change out of your T-shirt and sweatpants.

18. You can do things like travel together without fighting all the time. We’ve all seen (or been) that tragic couple fighting over where to get lunch at the airport so badly that one of them devolves into tears and puts her shades on indoors and lies across three seats in the terminal. You can do tedious things with your S.O . without all this fighting.

19. He plans activities that he knows you’ll enjoy. He doesn’t depend on you to be in charge of everything, and he remembers that you said you wanted to go to that new restaurant or museum exhibit.

20. He works hard at his job, but you’re his priority. If you ask him to go to an event that’s important to you, he’s not afraid to step out of the office to accompany you. He’ll figure out a way to get his work done, just as you would do for him.

So, are you wondering how you can say if he’s not the right one? Well, here are some signs to prove that the guy you’re dating is not the perfect one for you.

1. You come up with excuses for his behavior. Bad behavior really has no excuse, even if he’s “going through some sh*t,” is “angry,” or “had a troubled past.” Some of the kindest, most docile people I ever met used to be homeless, were CPS cases, and were in devastatingly abusive relationships. They never use their pasts as an excuse.

If he’s acting like a jerk or stringing you along, you need to be aware that there’s no excuse for his behavior, no matter what you say. If he’s sh*tty, he’s sh*tty, and you need to drop him.

2. If you were being honest with yourself, the reason why you are with him is because you don’t believe guys will actually date you otherwise.  Been there, done that, bought the entire tourist stand. Trust me, I wanted more than anything to have a loving husband of my own. I know how bad it feels. But it’s better to be alone than to be with someone who hurts you. It may be hard to believe, but it’s true.

3. You’ve been known to lie about what your partner does, or about your partner’s status to impress people. Been there, too. At this point, you’re trying to just hope that someone sees your relationship as impressive. People know you’re talking up your partner and that’s okay as long as your partner is good to you. If he’s not, you’re just hurting yourself.

4. You’ve come into direct evidence of him cheating and refuse to acknowledge it. No, he didn’t install Tinder for friends. No, the girl talking about his dick isn’t his cousin. You know that, so stop pretending it’s not what it is.

5. He refuses to acknowledge your relationship in public, or everything that involved commitment was forced by you. Do you literally have to be the one to tell people that you’re dating? Do you constantly feel like you need to drag him towards commitment, kicking and screaming? Let. Him. Go. have a little pride and just walk away. At this point, it’s not a relationship; it’s a tug of war.

6. You literally have to beg to be affectionate with you. I have seen this a lot with friends who were stuck in dead bedroom situations, and they still believed that their partner loved them despite showing no affection, no interest in sex, and open hostility to them. It usually takes a bunch of people sitting them down and telling them that this isn’t normal, nor is it salvageable, for them to decide to dump them.

Don’t wait until people have an intervention. If you literally beg, plead, and cry for affection and attention, one of the signs he’s not the one and it’s best to leave. Trust me when I say, at the very least, most people will at least find sex once they’re single.

7. People have begged you to dump him. I’ve said it before and I’ll say it again: if a friend actually is telling you to dump him, it’s because his actions are alarming enough for them to be worried about your wellbeing. Most people will bite their tongues when it comes to a person’s partner because they don’t want to lose the person. If people are risking that to try to save you, listen to them.

8.  Overall, the relationship dynamics are skewed. In most cases, the delusional ones are doing 90 percent of the work in the relationships, while the jerks only do about 10 percent. If you find yourself bending over backward to try to make him stay/ commit/ love you, you’re fooling yourself. As hard as it is to acknowledge, love can’t be negotiated that way.

9. You legitimately don’t know much about him. Do you know his hobbies, his issues at work, or other major things? If you don’t then, you may be seeing him as a Manic Pixie Dream Guy. That’s not a good sign, honey.

10. You lied yourself to get him. This is just as bad as seeing him as a Manic Pixie Dream Guy, because you can’t keep up the charade forever. This is literally setting yourself up for failure. Why do that to yourself?

11. You’re only happy when you’re in a relationship. Been there, done that, also bought that tourist stand of merch. Trust me when I say it’s better not to get involved unless you want to be involved with a specific person.

Now that we have laid out some things to consider before saying yes, is the man you are with now the right guy for you? Or his qualities falls more on the negative side?  If he has more negative qualities than the positive, try to think twice, or even thrice. Never settle for someone who’s not good enough for you.

Paper or Plastic? Choosing the Best Tableware for Your Reception 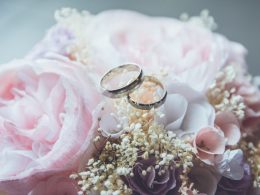 When Not to Wear Your Wedding Ring